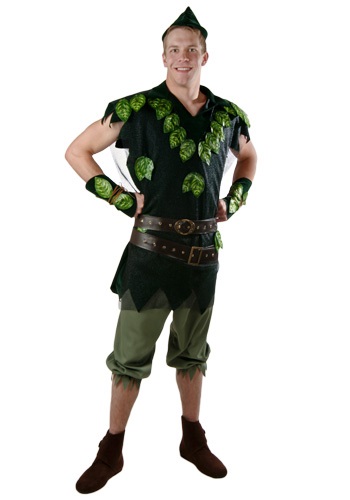 Second start to the right and straight on till morning!

We're not going to lie, we really want to fly. (Ooh, that rhymed.) We want to take the second star to the right, and keep flying until we hit morning. We want to play in the Neverland mermaid lagoon. Sleep in the Home Under the Ground. We want to be the boy who never grows up.

Imagine all the grand adventures you would have if you were Peter Pan. Living with six other lost boys, and a fairy. Capturing Tiger Lily's friends, and being captured in return. A grand game between both parties. And fighting pirates. Dueling the fearsome Captain Hook, and watching First Mate Mr. Smee hide in fear. Those would truly be the best of times.

But, alas you did not fall out of you pram as a baby. You did grow up. However, this Halloween when you put on this Adult Deluxe Peter Pan Costume, you can be the boy who never grew up. You can tell your friends all the awesome things you did, even if you didn’t actually do them. Because, even Peter makes up stories all the time about the things he's done. So, tell them how you duel pirates, live in a Home Under the Ground, and how you tease mermaids by flying above them. And when they ask the secret to flying you can tell them: All you need is a little faith, trust, and pixie dust.