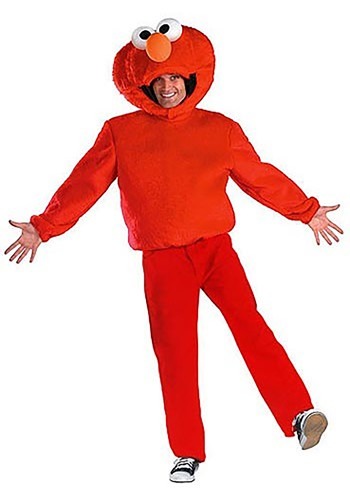 Hold on a second. Elmo's first appearance in Sesame Street in 1972 as a baby monster. Then he appeared as the Elmo we know and love in 1985... that means that Elmo is now well over the age of the 30. That's crazy! He's old enough to head out into the world, get an apartment, and land a full-time job with benefits. He's even old enough to run for president of the United States. That's totally wild! Then again, Muppets don't follow the same rules as humans, so in Muppet years, maybe being 30 is closer to being 4 or something...

Anywho! Maybe it's time for you to take on the role of the 30 something (or 40, depending on what you count as Elmo's first appearance) Muppet with this Adult Elmo Costume!

This adult costume helps you transform into the adorable character from the hit children's show. The costume starts with a red, long sleeve style shirt that has plenty of red faux fur on the exterior to recreate Elmo's red fur. It has a fastener in back for a quick and easy fit. Of course, the finishing touch to this outfit is the Elmo mask! The overhead style mask is covered in faux fur and has soft-sculpted features, like a pair of white bulbous eyes and an orange nose. It features a large opening for the face and it secures in place with a strap under the chin. The pants are not included, so you will have to pair this up with your own pair of red pants to achieve the look in the image.

At Home on Sesame Street

Maybe it's time for you to teach the younger generation just how awesome Elmo is in this licensed Sesame Street costume! After all, you and Elmo might be the same age... in human years, so you should feel right at home wearing this outfit.

Size Chart
XL
Inches
Centimeters
Costume Sizing Tips
Questions & Answers
There are no questions for this item yet. Be the first to ask a question!
Ask a Question