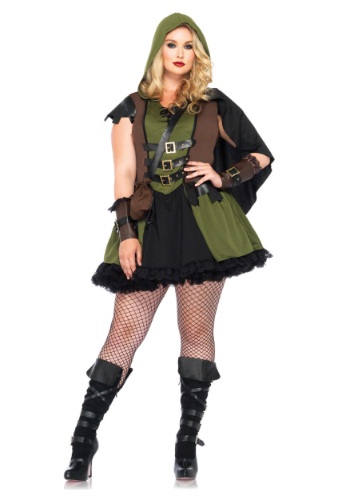 The legend of Robin Hood has some pretty solid staying power. His story has been told in various forms for roughly six centuries, and he’s just about as popular today as he ever has been. For as much as Robin Hood and his band of Merry Men have held their place in popular culture, though, there are still some major things missing from their mythology. Women, for instance.

As hearty and durable as the Merry Men might be, it’s high time for a Merry Woman or two to join their ranks. No knock on Maid Marian, who has plenty of tricks up her elegant sleeves and can certainly hold her own in a battle of wits, but she doesn’t fill quite the same role as a Little John or a Friar Tuck. We want to see some head-knocking, rabble-rousing, sheriff-pestering ladies out there taking from the rich, giving to the poor, and having a heck of a good time doing all of it.

Do your part to break up the boys’ club in this polyester Robin Hood dress. This adventurous hooded dress features a zipper up the back and black lace ribbons up the front, with adjustable gold buckles at the center. Stylish flourishes include black lace at the edge of the skirt, faux leather sleeves, and a black cape. Top it off with a pair of arm bands and a snappy satchel and you have a classic look straight out of Sherwood Forest. Tell Robin Hood to make room for one more member!