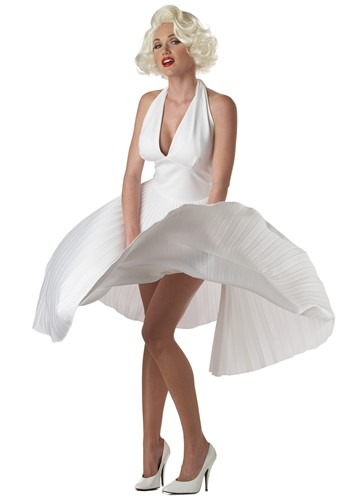 There are some images that are instantly recognizable. Albert Einstein, hair askew, tongue out. The black and white photo of a sailor kissing a nurse at the end of World War II. Construction men sitting on scaffolding in the last stages of building Rockefeller Plaza in New York City. These are images that are all over the world. Oddly enough, the most widely recognized photo however, is the rolling hills and blue sky of the desktop background from early versions of Windows.

There are also people that everyone recognizes. President Obama. Princess Diana. Tiger Woods. Muhammad Ali. Bono. Kim Kardashian. Taylor Swift. Of course the most recognized people tend to be actors. Their faces get plastered on billboards, posters, in TV commercials, across newspapers. Perhaps, the most iconic actress was the beautiful, the sultry, the stunning Marilyn Monroe.

We remember her beautiful blue eyes, shocking red lips, and stunning blonde hair. Now you can be as iconic as the lovely starlet with this Marilyn Monroe Deluxe White Dress. This is the same style dress that she wears in her most iconic photo. She stands over a New York City grate, her skirt flying up as she tries to keep it down. You can recreate this exact scene from the move The Seven Year Itch. Just find a fan, and try to keep that skirt down. You might even become one of the most recognized people in the world. Your face plastered on Time magazine.