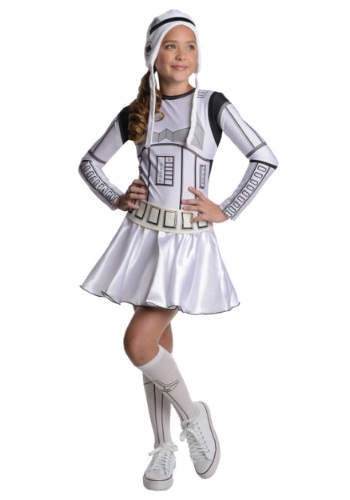 It is a period of civil war. Rebel tweens, striking from a hidden basement, have won their first victory against the evil parental Empire.

The Empire needs you! Strike back at those rebel scum in style in our Stormtrooper Tween Dress Costume!

Despite their notoriously lousy marksmanship, Imperial Stormtroopers are among the most feared troops in the galaxy. Likewise, despite or perhaps because of their ferocious attitude, tweens are among the most feared ages by parents. Together, a sure winner for Imperial morale, causing terror and obedience wherever they go. Let your little Imperial live out every tween’s fantasy: being a soldier raised to one thing without questioning. Get yourself an Imperial Officer costume and they’ll have to listen to you! “Lord Vader will not be pleased if you do not run the vacuum after you have friends over!”

This officially-licensed Stormtrooper Tween Dress Costume falls more under the “inspired by” category than a set of regulation 501st Legion plasteel armor, but it makes its wearer instantly recognizable as a loyal Imperial subject without sacrificing fashion. It features a pullover dress with a satin skirt and a stretch knit bodice, a built-in tulle petticoat, a white faux leather belt with a Velcro fastener, 100 percent polyester socks, and a knitted acrylic laplander hat, all with printed Stormtrooper armor details. Just imagine, maybe this is what Princess Leia would have worn if she had been raised by her dad! (Spoiler alert for a 40-year-old movie!)