Adult Cop Pick Me Up Costume 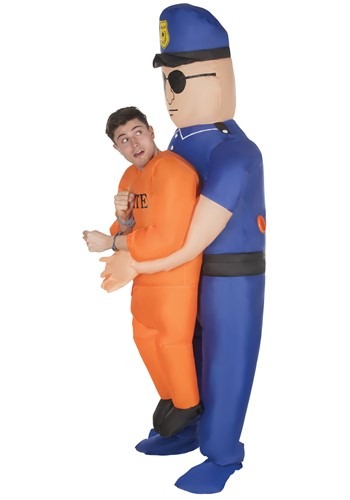 You knew when going in for the mission that it was going to be tough. How was a boy in blue ever going to get along with a so-called prisoner? But the world depended on you both getting along. Who else was going to be able to sneak back into the secret lair of the Alcatraz Authority!? Were the plans for some mysterious nuclear device hidden there? Maybe it was where the half-cousin, twice removed of the Ambassador of the United Nations was being held. Perhaps it is just where the cutest dog at the Halloween party is hiding away from all the noise.

We're not sure! All we know is that whenever a cop and an inmate team up for a comic adventure, it means it is destined for success on the silver screen. Destiny is calling, folks. It is time for you to pair up with Officer Airhead and march your way into the base and find the glory that you've been looking for. All we can hope for is that he's not gonna be made up of a bunch of hot air!

Begin the adventure now when you pick up this Cop Pick Me Up costume. This inflatable jumpsuit has elastic at the wrists, neck, and ankles as well as a fan to help inflate your unexpected ally, a big puffy police officer! You get to play the part of the would-be prisoner, but how you want to play that role is all up to you!

We're not sure what sort of film you're bound to specialize in when you climb into this Cop Pick Me Up costume, but we're sure the networks are going to leap at the idea of picking up your pitch! All you'll need to decide is where you want to head on your path to fame. Fortunately, you'll be having fun the entire time thanks to your airy law enforcement companion.