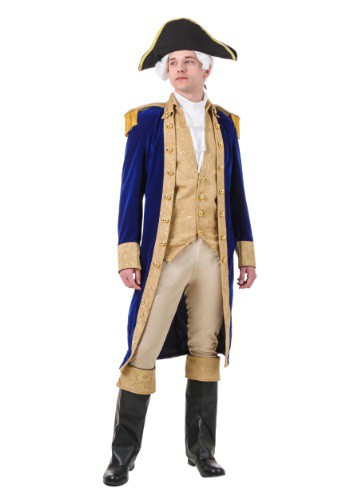 Not Just a Character in a Musical

Before he was dancing on stage to the music of Lin-Manuel Miranda, George Washington was doing some pretty cool things. No, seriously. Just pick up any American history book and you can read all about the guy. Let’s see, he supposedly chopped down a cherry tree when he was 6… while most kids were playing with blocks at that age. When he was 20, he became a Major in the Colonial Military. He fought in the French and Indian War. Then he brawled it out with the British in the Revolutionary War and became the leader of the brand spanking new nation, the United States of America!

George Washington is the kind of man that everyone should strive to be! In fact, we even had our costume designers cook up a costume to help you look just like the classic historical figure.

This George Washington costume recreates the iconic look of the United States’ very first President! The costume comes with a brilliant blue jacket that has gold trim and epaulets. It comes with a vest front that has decorative buttons. The white ascot has a slightly fancy style that’s suited for a presidential kind of guy. The tan pants have an elastic band in the waist, providing a comfortable fit. It comes with a black hat that has elastic in the crown. To finish the look off, it comes with a pair of faux leather boot tops that fit over your shoes.

When you wear this George Washington costume, you’ll feel like the most presidential president of them all! Of course, if you truly want to master the look, you might want to wear one of our colonial wigs to get the complete look from the one dollar bill.