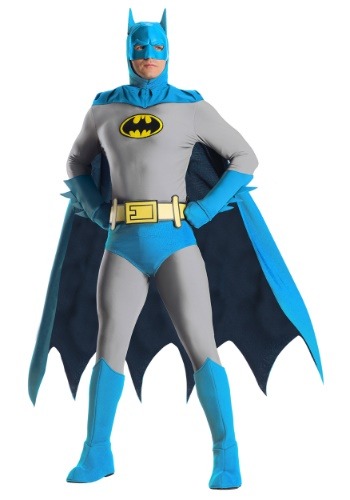 Batman plays many roles. He is the parental figure in Robin’s life, teaching him life lessons and on occasion, proper grammar. He is the stalwart defended of justice in Gotham City, the beacon of hope that shines a light during dark times. He’s also a pretty groovy dancer when he needs to be! Have you ever watched him do the Batusi in the club after an orange juice? Well, we just have to say that he shakes a pretty mean cape! He’s also an intellectual genius, having the smarts to outwit The Riddler during all his maniacal schemes. It’s really no surprise that anyone would look up to the superhero!

But, how does one even begin to walk in the footsteps of Batman? Do you need to be a billionaire playboy? Do you need to adopt a young acrobat as your ward, so you can teach him the ways of crime fighting? Do you need to become pals with the local police commissioner? No. The answer lies with this premium Batman costume!

This classic Batman costume is a premium outfit based on the traditional interpretations of the iconic comic book character. The suit has the light gray and blue color scheme seen in some of the earlier comic books. It also has the bright yellow Bat-symbol on the chest with a matching yellow utility belt around the waist. It also includes a blue cape and matching mask to put the finishing touches on the look.

This classic Batman costume might not come with the deed to Wayne Manor, but it certainly will make you feel like a true superhero! Just make sure you brush up on your dancing skills when you wear this outfit since everyone will be counting on you to perform the Batusi at least once!