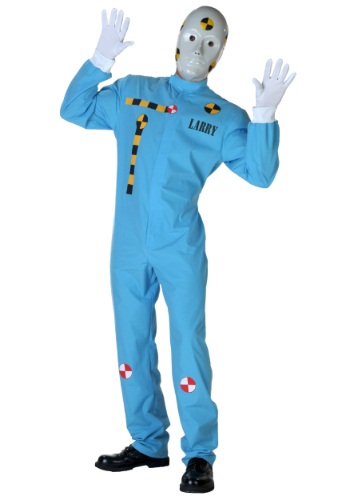 Do your pals know you as the risk taker of the group? Are you generally thought of to be unflappable? Do you think that skydiving, base jumping, swimming with sharks, and bungee jumping all sound like a perfectly lovely way to spend a Tuesday? Do you dream of being stunt double?

While some may tell you to slow down and tread on life with caution, we say dive in head first! And just to show you’re not afraid of any crash-and-burn scenarios life may throw your way, wear this plus sized crash test dummy costume to your next big costume party! That ought to show those naysayers because as a daredevil, nothing gets you pumped for your next big adventurous feat than someone telling you not to do it. Being told “you can’t do that” is how you got motivated to swim between California and Hawaii and how you finally summited Everest, after all. Honestly, a little car crash testing seems easier than all that.

Easiest yet is to put on this blue jumpsuit, mask, and white gloves and become “Larry” for the night. You’ll be unrecognizable by face but our guess is that you will find some party feat by which to distinguish yourself. Just remember, Larry, real cars are not meant to be tested by you. Those are simulations. But on the upside, you probably won’t be mad if folks bump into you all night long.