Plus Size League of Their Own Dottie Costume 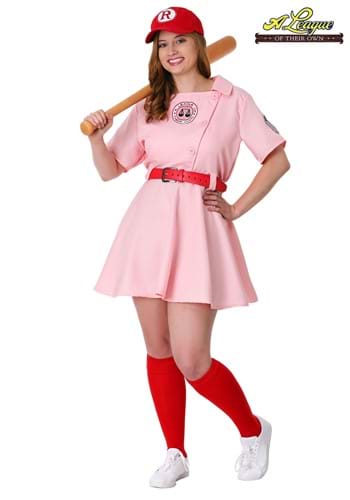 Sometimes you find yourself in 1988, reminiscing about that time you played for the All-American Girls Professional Baseball League during World War II. Those were great times! You and your sister, Kit, moved from Oregon to Illinois to play professional baseball, something you never thought would be possible. We’re talking dreams here, so stay with us. There were tears, sure, and a lot of yelling. But there were also great moments: teamwork and triumph over adversity. Those times made you the person you are today.

Okay, we understand that this probably isn’t literally your story... it's Dottie Hinsons! But we’re talking about pretending here. Because Halloween is all about pretending to be something you’ve always wanted to be. Unless you actually did play for the All-American Girls Professional Baseball League, but then you’d have your own uniform and you wouldn’t need this costume.

This officially licensed Plus Size League of Their Own Dottie Costume is exclusive and made by us at Halloween Costumes to look just like the uniform worn in the movie. The short-sleeved twill dress is pink with embroidered stars-and-bars shield and A League of Their Own patches. Accessories include a red faux leather belt with buckle, knit knee-high socks, and a ball cap with embroidered “R” (Rockford Peaches) patch. You’ll need to supply your own bat, shoes, and winning spirit, but we figure that won’t be a problem! This League of Their Own Dottie Costume is Plus Sized so anyone can be the hero in their own story, which is really the most important part of playing.