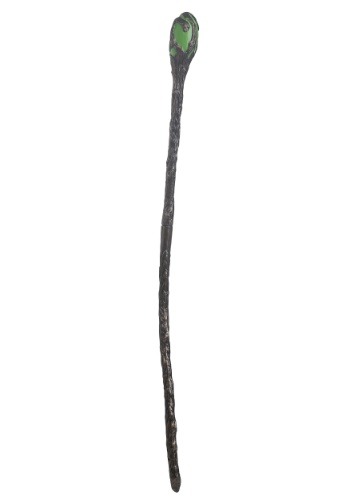 What's the difference between a wizard and a warlock? Sounds like the leadup to a pretty good joke if you ask us! Honestly, though, the differences mainly lie in the mystical master's style. A warlock, for instance, would never even consider working his magic in the starry robes we see wizards wearing in children's books. He's too dignified for that. He doesn't work for some king in a tower, reading the stars and mixing up potions from a polished cauldron. He's an ancient purveyor of magic. A warlock lives in a hidden hut, far away from civilization and a short commute from a nice circle of standing stones. And so, it's safe to say that a warlock needs something more substantial than a wand. He needs a link to his magic that will stick with him through the centuries while making him look awesome when he makes rare appearances in civilization. This is a magic man who needs a staff!

This staff has a deep, wood texture throughout. The top has a mysterious egg on the top with a rich green hue. When you're not embracing your warlock persona, the staff can be stored in two parts until you're ready to use it once more.

Way to Rune the Party

Warlocks have a lot of skills. They can cast runes, interpret ancient scrolls, and even hide whole cities from time itself. So it's no wonder why you'd want to take on the role for plenty of events such as RPGs, conventions, and of course, Halloween. Just make sure you mind yourself around the snack table, you wouldn't want to dip those billowy warlock sleeves in the punchbowl.