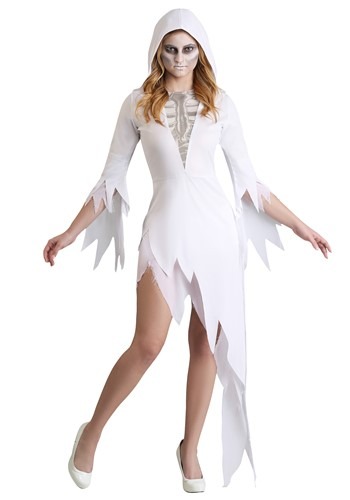 Currently, ghosting is a very serious problem in the world. It can happen to anyone. Perhaps you've had your own experience with ghosting? One day, you're having deep phone conversations with a person you're falling head over heels for and the next, a simple text isn't being returned. Boom, ghosted, just like that. Or maybe, you've been the ghoster? Maybe you thought you had feelings for someone and then you heard them pronounce the phrase, "crispy chicken cutlets" as annoyingly as humanly possible so there's nothing left to do but end the relationship, ASAP. Hurting their feelings and bruising their ego is not your style, so ghosting is the gentlest way to break things off without it getting too messy. They'll get the hint, eventually.

The act of ghosting is prevalent and many have strong opinions on the matter. Some think it's totally fine and others find it reprehensible and immature. Whether you're for it or against it, the ghost babe costume makes it all okay. Ghost the person (or people) you've always wanted to while dressed as a ghost and feel justified in your actions. Give 'boo, be gone' vibes to your former boo by saying nothing at all, and focus all your attention on unfinished business instead.

We support your savage decision to ghost someone but only if you're wearing the Made by Us women's ghost babe costume. The exclusive and high-quality asymmetrical dress has a jagged double hem and matching sleeves. A hood is attached while a ghostly, skeletal v-shaped inset is featured in the center.

DO NOT FEAR, JUST DISAPPEAR

When you're dressed as a ghost babe, a weight gets lifted off your shoulder while you ghost all the people you've always wanted to. Make your specter-status more official with a ghoulish makeup application and a pair of white stockings.