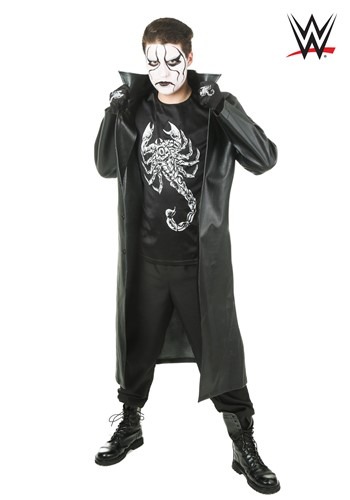 The Icon, The Franchise, The Stinger, The Vigilante... He is a man of many names, but he will always and forever be known best by Sting, one of the greatest wrestlers to ever enter the ring! Steve Borden is one of the few wrestlers with a career epic enough to earn him 13 heavyweight titles... and among the only who have such a conflicted history that only ten of them are recognized by the WWE. The fact that he's of only two in the WWE Hall of Fame should mean something to getting those other ones recognized, yeah!?

We suppose that's what happens when the start of your career has you as the bad guy of the wrestling community. Tricksy? Perhaps. Notorious member of the Four Horsemen? Well, yeah, that's hard to deny. And even harder to climb back from. But, when you're beat down unfairly and rescued by RoboCop... c'mon! That's an epic story!

If you can't get enough of seeing Sting, despite his retirement, his iconic look is captured here with our exclusive and officially licensed Sting costume. Once you get the face makeup on you'll feel the true power of Sting flow through your veins and not even Ric Flair would dare challenge you to a cage match. This is the power of the mighty Sting! Deliver the Scorpion Death Drop to any who challenge you and show that you are and forever will be the greatest, the best, the champion of all time.

You'll love showing off some of your mighty wrestling moves even. The question is really if you want to be the Sting before Terry Taylor or if you'll accept siding with the good guys and become the face of the WWE. We're sure you're going to love this look no matter which way you go.