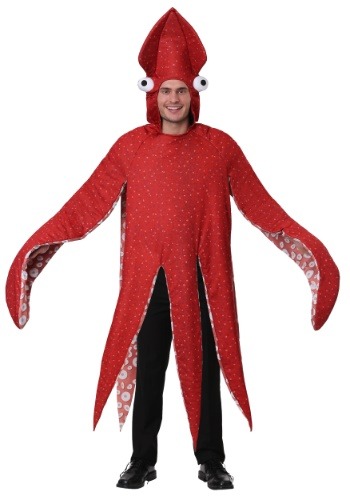 We were under the impression that giant squids preferred submerging themselves in the deepest darkest corners of the sea— apparently, that's not always the case. A rare giant squid was spotted wandering the streets in a town near you and it's boggling the minds of scientists and townspeople alike. Though imposing, the ginormous aquatic monster seems to be friendly and jovial so no need to fear being dragged down to his underwater lair. On the contrary, the giant squid seems to be looking for friends. He keeps reaching his tentacles outward and it seems as though he wants a high-five, maybe even a hug!

Upon a second examination, we agreed that this underwater anomaly is actually a man in a really, really convincing giant squid costume. It sure fooled us and a handful of puzzled marine biologists! If dressing as a squid would get your tentacles all in a twist (and that's a good thing) then this costume will make your Halloween go swimmingly.

Created by our team of talented and sea-life-obsessed designers, this costume is essentially a top with an attached hood. The two tentacles that fall on either side feature elastic straps so arms discreetly hide underneath. Six more tentacles surround the body and hang below the knees. The costume zips up in the back and a traditional cephalopod head with bulging eyes serves as the attached hood to complete the costume.

Hey, want to hear a silly squid joke? (We're going to tell you anyway.) How many tickles does it take to make a squid laugh? Ten-tickles. Pretty silly, huh? Use your movable tentacles to inspire some silly shenanigans this Halloween by flailing them around as much as possible since you're the one and only squid-a-marinky-dinky dude. (Okay, we'll stop with the squid jokes... for now!)