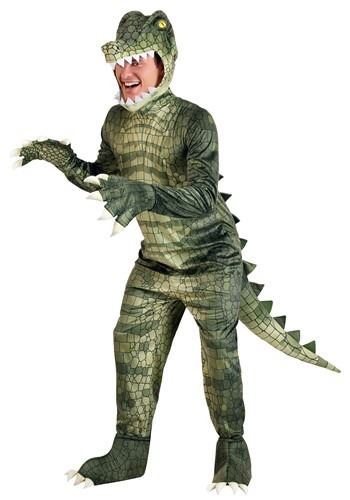 When it comes to some of the most terrifying reptiles that currently walk the lands and swim down our rivers, there are a lot of arguments that go around. First, there is the question of how directly related to dinosaurs they might be. Certainly, if any of them could manage to run around like bipeds, we'd scream raptor and rush for high ground. So, we think that's a pretty clear relationship. Others want to bring up that birds are more likely the modern descendant, but that's why they make distant cousins, right?

The bigger question is whether this particular costume we've crafted is an alligator or a crocodile. This is one that has some serious camps and several drag-out Nerf battles. At this point, the only option we have for the future of our peaceful coexistence is to outsource the answer. You have a pretty keen eye, we're sure, and no doubt your friends and family have numerous distinguished degrees in herpetology (aka the study of amphibians). So, what do you think?

Our in-house team of animal obsessed artists and designers put together this "Dangerous Reptile Costume" that we know you're going to love whether you'd like to be an alligator or a crocodile this Halloween. (Or an unknown cryptid amphibian? The choice is yours!)

The jumpsuit zips up the front and features green scale print and stuffed spikes along the back and tail to really emphasize the "dangerous" look. The sewn-on mitts keep your claws always at the ready and the shoe covers fasten with elastic at the ankles and under your shoe. The hood fastens under your chin with a hook and loop tab and features soft-pointed teeth, watchful eyes, and a snout that is somewhere between a U- and V-shape (depending on who you ask).

Turns out that there isn't much difference between the crocodile and alligator beyond the particular shape of its snout. Is it square or V-shaped? Well, they're all mostly rounded! Until you can tell us for sure, we're going with whether it says "See ya later" or "After a while."