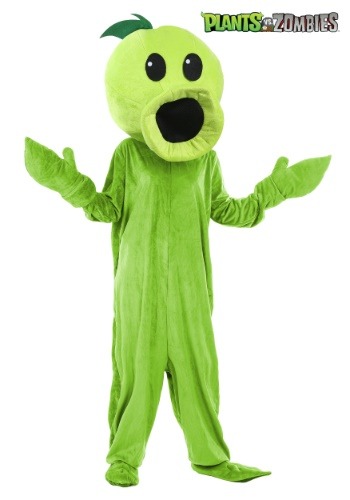 Guide to "Garden" Your Home

In a world overrun by zombies, only one great strategist has the solution to it all. It's not hoarding all your guns, it's not building a sealed shelter stocked with food, and it's certainly not running for your life. Our hero has spoken, the battle lines have been drawn, tacos have been created, zombies are crawling out of the graves, and the radishes are about to begin a counter-offensive.

Hold on a second... What? Radishes? Yeah, you heard us right. Crazy Dave is off to save the world with his squads of plant warriors taking down the hordes of various zombies, and which group of brave soldiers is at the forefront of the chaos? Those brave little peashooters. They're the bulk of the army, the grunts who can take a punch, and keep going to deliver a big pow right in the kisser of those ugly undead dummies. These licensed costumes are exclusively Made-By-Us! The soft, oversized jumpsuit is easy to slip on with foot and hand covers. The headpiece is hilarious with a giant mouth under the large eyes with a mesh hole for visibility.

Try as the vegetable resistance force might, their forces are beginning to dwindle, and the zombies are pushing ever further into the backyard. Reinforcements are becoming a dire necessity. Are you ready to join the best anti-zombie fighting force the world has ever seen? You better have the right gear then. Swear in with Crazy Dave and set out on your first mission in this officially licensed adult peashooter costume.