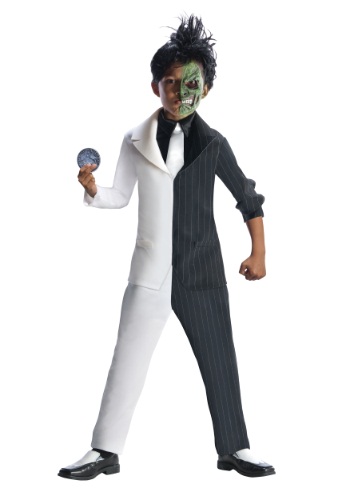 Child Joker Gloves
£11.99
Add
Product Information
Items Included
Features
Even though Batman is one of the most beloved comic book, movie, and TV characters of all time, not EVERYONE loves Batman. Some kids are a little devious. Heck, some kids are a little villainous. Why deny them their nature and force them to be a hero? At least that’s the path that Harvey Dent took when he became the notorious Two-Face villain in the Batman series.

Villain or not, we all know that Harvey had his own demons that he struggled with. From being envious of Batman to falling in with the wrong crowd, Harvey could never quite make things work in his favor, no matter how hard he tried to do the right thing. In the end, his emotions got the better of him and he felt the only way he could truly make his mark was to fight against Batman instead of with him.

This Boys Two-Face Costume is for the boy who spends his time concocting villainous schemes and kids who have a strange penchant for flipping coins. This costume is officially licensed from the Batman series and is made of 100% polyester for a comfortable, breathable fit. The shirt is a one-piece garment with the tie, jacket, and faux pockets – it attaches with a Hook and Loop fastener closure in the back. Also included are the matching pants. The costume also comes with the classic ½ face mask and, to complete the look, a printed, foam, two-sided coin. No true Batman group costume would be complete without this two-faced villain!