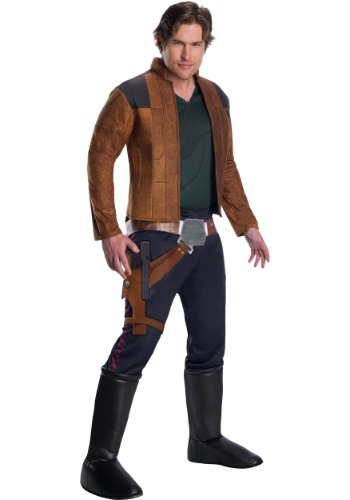 It’s true. Han Solo wasn’t always the dashing, experienced scoundrel that we all came to know and love in the Star Wars films. He used to be a brazen inexperience scoundrel! That’s the story that Solo: A Star Wars Story explores. Han’s quests as a younger man find him meeting Chewbacca for the first time. He engages in dangerous heists. And, of course, he gets his hands on his iconic ship, the Millennium Falcon. It just goes to show that every great hero has to start somewhere. Even your journey as an up and coming smuggler has to start somewhere…

Yes, you could be like the one and only Han Solo! All you need is a cocky attitude, a knack for shooting first, and an outfit to match your newfound lifestyle. (A Wookiee best friend never hurts either!)

This costume comes licensed from Solo: A Star Wars Story. It comes with a jacket, a pair of pants, and a belt. The jacket is a light brown color and comes with an attached shirt front, making it easy to shift into the role of Han Solo. The pants have an elastic waist for easy fitting, while the bottoms end in foam boot covers that allow you to wear any shoes you like with the costume. Finally, the belt recreates the look of Han’s signature holster, which makes you look primed to shoot first when you wear it!

Just put the costume on and you might feel ready for a cruise in the Millennium Falcon. Of course, you might have to engage in an intense game of Sabaac against Lando if you want to get one of your own. Also, be sure to check out our Star Wars blasters to make sure that you’re armed for any kind of dangerous situation!