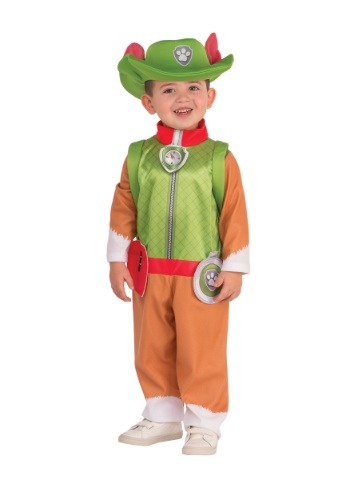 Is he ready to become Tracker? The super cool pup hero from the hip Paw Patrol squad? Tracker is totally one of our favorite members of the team, and if he's your kiddo's fav too, then we're sure your child is going to love bringing the character to life. And all they're going to need is this kid's Tracker costume!

Tracker makes his home in the jungle with Carlos, and he's pretty well known for driving his off-road Jeep too! He has super hearing and is bilingual, which makes him a pretty useful pup. Your kiddo might not be ready for action with the Paw Patrol, or to help save the day, but we can get his imagination started with this officially licensed costume look!

This costume features attached character details and the jumpsuit appears just like the animated character looks on TV! A little tail is attached to the back of the costume, and the signature hat also features Tracker's ears for full pup effect. Complete the costume style with the included backpack, and he'll be ready to help the Paw Patrol during all their jungle adventures!

This kid's costume comes in size XS for toddlers, as well and small and medium child's sizes. Whatever age your kiddo is, we're sure they're going to love becoming a member of the Nickelodeon team. Coordinate this costume with siblings and friends to assemble to whole Patrol squad. With this costume, we're sure they'll be ready to say "I'm all ears!"