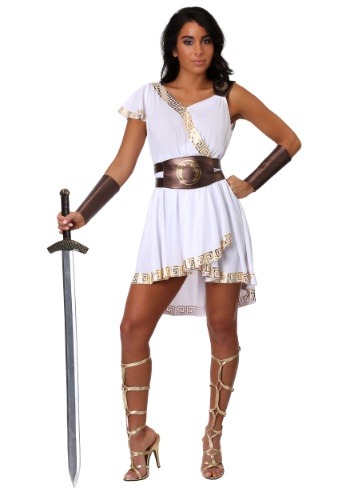 Gentlemen, Lend Me Your Spears

The mythology of Greeks and Romans wouldn't be much without the drama of the gods. They really went out of their way to show the danger of having too much time on their hands. Immortality will do that to you. The gods often occupied centuries of their lives with petty competitions. And it's not like they bowed out with grace either, Poseidon cursed Athens with drought when they preferred Athena's gift of an olive tree to the sea god's gift of a salty, useless stream.

Speaking of Athena, she was pretty great at setting mortals against each other for petty reasons. Now that we think about it, all the Gods and Goddesses weren't above that. No wonder why training for war was so important to the Greeks and Romans. Luckily for them, they had outfits that were both fashionable and easy to fight in. Want to raise up an army this Halloween? Folks are sure to join your battalion in no time, no enemies needed!

This lovely Made-By-Us wrap dress will make you look right at home in the arena of a Colosseum. The brilliant white dress zips up the back and has faux leather accents with gold stamped leaf print. The white is accented with geometric gold trim. You'll also get a belt that secures with a hook and eye strip at the back and flexible gauntlets that cover your forearms, making you ready for anything the gods might throw at you!

Having a good time is all but guaranteed in this sleek ensemble. And since it's designed by our company, you'll be able to wear this look again and again. Good thing, cause you'll want to wear this to themed events as well as Halloween. Throw on some gladiator sandals and call up Dionysus, it's time to fight the fun fight this weekend!